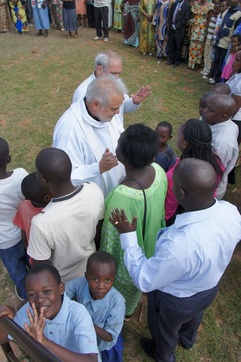 In Aug, 2011, Father McAlear traveled to Rwanda in the heart of the African continent to preach and minister healing.

Rwanda was griped with ethnic violence in the 1990s with great loss of life. Well over a million people were killed in the short span of 100 days in a bloodletting that staggers the imagination. It was an ethnic conflict that gripped the country with horrific results that are still felt today. One if the worst and most painful parts of this mass murder was that both sides in the conflict are Catholic. Religion and faith meant nothing to people caught up in the blood lust of the day. Today is a new day and a time for rebuilding and reconciliation. This missionary tour was a small attempt to preach forgiveness and reconciliation, pray for healing of the scars and bring the light of Christ into the darkness of the memories and experiences of the people. The main focus of the trip was a priest retreat to minister to the religious leaders who lived through the horrors of the genocide. Then there was a small retreat for government leaders. There were cabinet members and senators, generals and high government people, members of the St Thomas More Circle, who were present as they themselves seek to heal and bring the nation to healing. They are making major strides in developing the nation today.

There was a youth retreat and rally that gathered a couple of thousand youngsters from around the country and from Uganda and the Eastern Democratic Republic of the Congo. Several healing services, rallies, Masses and preaching filled in the schedule, as well as a visit to the apparition site of Kibeho where Mary appeared in the 80s.

The trip was a taxing and difficult, exhilarating and rewarding experience. The Lord blessed the ministry and blessed many people with healing, both of physical and emotional pain.

Rwanda is a poor country with many challenges to overcome but which is on the road to recovery. The scars of war, the scourge of AIDS, the large number of orphans roaming the streets, the lack of basic services are all heavy burdens and obstacles to growth. There is growth and development as the people are determined to make it, rise up from poverty, heal and find reconciliation, rebuild and grow. The underlying reason for their optimism is their faith, which is firmly rooted in Jesus Christ. The experience of the genocide brought them to the foot of the cross where is found forgiveness and peace. They rediscovered the Gospel of Jesus in new and deeper ways and that has given birth to a new hope.

Below are some of the pictures from his ministry there.